As 2015 drew to a close, we reflected on the disappointments of the year from an investment returns perspective. We then turned our minds toward 2016 hoping, rather than expecting, that the market outlook is for a better year. In this post, we bring you the market outlook that will guide the ContinuumFP investment recommendations for 2016, at least initially.

Whilst each of us dealt with personal circumstances during 2015 (that gave rise to moments of joy, hope, loss – and a range of emotions), our funds invested through superannuation and otherwise, have also been exposed to significant events in the markets in which they are traded.

2015 was marked with a series of market-influencing events, from 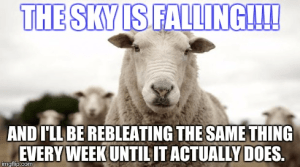 These events all led to volatility, often with downside consequences, but in the main leaving the equities (and the fixed income (Bond)) markets, little changed from how they closed out the 2014 year.

If your investments are heavily weighted in favour of an Australian asset allocation it will have been a disappointing year. If however, you have employed a diversified portfolio, then you may still have finished the year in positive territory.

Your investment timeframe will affect your concern over the market outlook…

Interesting headlines lead many of us to read – often with concern – the predictions made by various investment market commentators. However, any one year in a long-term investment timeframe should not have too significant an impact on the strategic outcomes expected for that investment. In this situation, market outlook predictions in the daily media should only of passing interest.

All investors should undertake an investor risk profile assessment. By this process, your personal capacity to deal with investment market performance over your investment timeframe is appraised. Typical financial goals for which timeframes are determined, include retirement; acquisition of a major lifestyle asset; or relocation to a new residential environment, to name a few. Your investment timeframe beyond 2016 will determine how consequential the market outlook – and its attainment during 2016 – is for you.

Unless your investment timeframe is less than three years, diversification of assets is almost certainly going to be an important feature of your portfolio.

A very economical way to achieve diversification in your investment portfolio is to invest through fund managers. Managed funds operating in Australia are pooled funds entrusted to fund managers under a managed investment scheme. These funds allow access to resources not readily available to individuals who are not possessed of considerable wealth: resources such as –

Whilst managed funds can be single asset class funds (i.e., shares, property, bonds, infrastructure etc), they can be quite diversified within that asset class – in that the manager would not, in most cases at least, be investing all of their client’s money into one company or venture: they would not hold ‘all of their eggs in one basket’!

And not all fund managers adopt the same approach as to how they will allocate investment funds into the market: some adopt a growth strategy, some an income approach and yet others, a value approach – with a range of strategies in between. Their investment philosophy can also vary from indexed (passive), active, concentrated, and so on.

The ContinuumFP perception is that the market outlook for 2016 is looking OK – but not stellar! (It started dreadfully, but that probably improves the chances of there being a better result for the rest of the year – an outlook not fully able to be appreciated by those who are already invested.)

The scene appears to be set for a divergence of economic outlook for the major economies. The USA looks to be the brightest star in this sky, followed by China (who is ‘disappointingly’ expected to have a growth rate nearly triple that of the USA). However Europe, the UK, Japan and others are expecting sub-par GDP growth for the year ahead; and Brazil and Russia are mooted to be drifting into Recession.

Whilst the US Fed has clearly indicated that they will start to raise interest rates in December 2015: and have been fairly clear that they will continue to raise rates towards a ‘normalised’ level over a reasonable length of time (many analysts thinking that the rate will be 1% by the end of 2016), the Bank of Japan (the BoJ) and the European Central Bank (the ECB) have both given strong signals that further quantitative easing is on its way for their economies.

There is quite a deal of speculation that the persistent strength of the Aussie dollar (the AUD), there will be at least one interest rate cut by the Reserve Bank of Australia (the RBA) during 2016. Currently, we anticipate this during the first half of 2016. The continuing fall in resource prices (iron ore, coal, oil, copper and so on) does not support this anticipation of an interest rate cut (generally these would result in a decrease in the exchange rate), but with the AUD lingering around the 70 cent mark (in USD), it is not offsetting the possibility of a rate drop yet.

Where goes the money?

In a situation whereby the US economy is growing (around 2¼% to 2¾% forecast for 2016) and the labour force of the country continues to become more fully employed, the consumer resumes their place as the driver of economic growth for the USA. Credit becomes more readily available for the consumer, more than 60% of the earnings of US companies is derived within America – and the USD is strengthening: in this scenario the US economy will be importing resources from other countries; and US citizen will be more likely to travel abroad.

China has embarked on a transformation of its economic drivers and is now developing significant infrastructure projects that are expected to come online within the next few years. These projects are expected to deliver a strategic and financial advantage in the transport of people and goods by sea and by rail. This transformation is designed to position them as a major hub for global logistics (linking Europe and the USA by a network of high speed rail), thus increasing their influence over trade and the allocation of resources. It should further add to the wealth of its people. (Recent short-term volatility in their sharemarket should not be interpreted as a failure of their economy, or of its reform.)

Misaligned tax treatment of income by multi-national corporate giants will see some changed financial dynamics until there is a coordinated effort by all countries to eliminate (or at least reduce) the impact and fiscal arbitrage achieved by these entities.

How resourceful can we be?

The recent trend in resources (read minerals), is for declining value as global economic growth has slowed over the past several years. However the owners of the substantive reserves (including Australian resource companies) continue to extract and sell into the market, thus keeping prices suppressed. We expect this situation to persist throughout 2016 and perhaps beyond. The ‘good news’ in this regard however, is that Australia has a number of the world’s largest reserves, being extracted by some of the world’s most cost-efficient producers. Whilst this may not be as profitable, the cashflow into our economy will help to sustain it during the period of transition from mining infrastructure development, to a more broadly-based services economy.

Expectations for growth and for, inflation are somewhat tied. The divergence in economic performance between the USA and pretty much the rest of the world, makes this a difficult call, but the forecasts have been declining over time with a recent prediction that global growth for 2016 will be sub-4% (in spite of the continuing improvement in the US – and the sustained growth in China of around 6%).

What we can be fairly certain about however, is that the low price of crude oil will not be a drag on inflation this coming year, as we have now passed the twelve month mark from when the prices so dramatically collapsed.

Whilst the global outlook is fragmented, the market outlook for Australia is a little more optimistic than might have been the case mid-year; and as we continue to see diminishing support for the AUD against the USD, our manufacturers and exporters become more competitive and, with low domestic interest rates, we should see continuing recovery in both employment levels and the GDP. Whilst a year of modest growth, it is our view that 2016 should set Australia up well for the following couple of years.